While plant-based meat, eggs, and dairy offer sustainability and nutritional advantages, the best reason to have them on the menu is the business case: consumer demand is shifting towards plant-based proteins, and the products in this category are innovating rapidly.

So, why add plant-based to the menu?

I. DEMAND IS RAPIDLY GROWING

I.7 Plant-based differentiates your brand and appeals to adventurous eaters

I.8 Plant-based gets media attention

Many restaurants are reporting that adding plant-based offerings attracts new customers. Pret A Manger saw double-digit sales increases of its vegetarian items in 2016 which led to the 2017 launch of 20 new plant-based dishes. Umami Burger started carrying the Impossible Burger in 2017 and has found it to be the #1 driver of new sales chainwide — now accounting for one-third of all burger sales.

from broadline foodservice distributors to independents

Datassential’s MenuTrends data shows the menu penetration of the term “vegan” growing 87% over the past 4 years.

The plant-based alternatives (to conventional animal foods) retail market is worth over $3.7B.

In the natural channel, the plant-based alternative market is worth $409MM.¹ Dollar sales of plant-based alternatives grew 17% in the past year. Plant-based dollar sales are increasing double-digits in every region of the country. Plant-based distribution is increasing across categories, as measured by ACV and TDP.

Food familiarity is key for flexitarians; they might eat a plant burger one night and an animal-based burger the next night. 70% of Beyond Meat’s consumers are flexitarians, and 9 in 10 US consumers who purchase non-dairy milk also purchase dairy milk.

According to market research firm Nielsen, 38% of US consumers associate plant proteins with positive health effects. Datassential’s Plant-Based Eating Keynote Report found the #1 reason (chosen by 49% of respondents) why US consumers are eating more plant-based is because they perceive them as healthier. Adding plant protein as a descriptor can cue health in the minds of consumers without indicating diminished flavor.

Since almost all plant-based foods are naturally free of cholesterol and saturated fats, and contain healthier fats (polyunsaturated or monounsaturated), putting plant-based meat and dairy on your menu can be a great way to appeal to consumers craving a healthier—but still decadent—choice.

The main reason consumers say they reduce their meat consumption is to be healthy and feel well physically. It’s well-known that meat consumption is directly linked to the rise of obesity and to an increased risk for several types of cancer, stroke, cardiovascular disease, lung disease and diabetes. According to the CDC, nearly 1 in 3 Americans has high cholesterol, which puts them at risk for several of those diseases. Because plant-based foods contain no cholesterol, consumers with health concerns are highly motivated to eat more of them.

In a 2017 national survey by market research firm Nielsen, a whopping 62% of U.S. consumers listed weight management as one of the benefits of plant-
based eating. For the seventh consecutive year, U.S. News & World Report voted the plant-based eating plan the best choice overall for losing and maintaining weight. Plant-based diets are typically higher in fiber, help people feel full longer, and they usually contain a higher percentage of fruits and vegetables which are less calorie-dense than other foods with similar volume.

A 2017 survey from research firm Mattson found that almost one-third of US consumers chose the environment as one of their top three reasons for eating more plant-based foods. After health, environmental issues seem to be an important driver in the recent uptick in consumer plant-based demand. Technomic reports that the percentage of consumers who reported eating meatless to be more socially responsible or sustainable increased by 44% from 2014 to 2017.

Growing crops, transporting them, feeding them to animals, and then eating only a part of the animal is highly inefficient, using up vast quantities of grains and legumes with a low nutritional ROI. For example, it takes nine calories of food fed to a chicken to get one calorie back out in the form of meat, and chicken is one of the most efficient meats!

United Nations’ scientists state that raising and killing animals for food is “one of the major causes of the world’s most pressing environmental problems, including global warming, land degradation, air and water pollution, and loss of biodiversity.” Additionally, conventional animal agriculture contributes more to climate change than emissions from the entire transportation sector combined – about 15% of all climate change can be attributed to animal agriculture. By 2050, we will have about ten billion people to feed, and we can’t do it with a system this ecologically inefficient. Plant-based alternatives are far less polluting and far less wasteful.

Adding products like plant-based burgers gives you a great PR opportunity to highlight your sustainability efforts. For example, swapping just one animal beef patty for an Impossible Burger saves the emissions equivalent of driving 18 miles. Focusing on sustainability is good for the planet, good for your customers, and good for the bottom line.

I.7 Plant-based differentiates your brand and appeals to adventurous eaters
Restaurants face competition for dining dollars due to over-development, penny pinching by consumers, and competition from supermarkets and meal kit companies. Adding plant-based entrées can provide an important point of differentiation by adding interest to your menu, allowing for innovation, and aligning your brand with customer values around health and environmental sustainability. As plant-based entrées continue to grab press headlines and social media shares, restaurants should capitalize on this interest by offering more protein-rich, plant-based menu items.

Plant-forward eating is on the rise with self-identified foodies, according to a survey from Datassential

I.8 Plant-based gets media attention
Plant-based eating is becoming mainstream in part because of celebrities like Ellen DeGeneres, Miley Cyrus, Casey Affleck, Jay-Z, Beyoncé, and many others. Athletes like Venus Williams, Kyrie Irving, NFL players, ultramarathoners, and bodybuilders all extol the benefits of plant-based eating and the impact it’s had on their performance. Health-oriented podcasts and movies like “Forks over Knives” have gained traction as well; a new movie about plant-based athletes from Avatar-director James Cameron, “The Game Changers,” recently premiered to great acclaim at the Sundance Film Festival.  New plant-based products like the Impossible Burger and the Beyond Burger have seen their sales skyrocket due to viral media attention in mainstream news channels.

Companies like Impossible Foods and Beyond Meat have reinvented the “veggie burger,” creating plant-based meat (meat, made from plants) that mimics the taste, mouth feel, and experience of all-beef patties. Options also include plant-based chicken, fish, cheese, egg, and even sashimi! Hundreds of meat, dairy, seafood, and egg alternative products are available via foodservice distributors for the creation of plant-based entrées.

Protein-rich plant-based foods like legumes and grains offer several benefits including lower costs, a longer shelf-life than animal products, and less price volatility. While some plant-based meat, seafood, and dairy products are priced at a premium, consumers are seeking them out and seem willing to pay for products that are better for their health and the environment.

Blending plant and animal protein is common in Europe and in U.S. college & university foodservice. Blending plant protein into meat allows you to add the health and sustainability appeal of plant protein while also keeping the product familiar to consumers, all for a cheaper unit cost, which can be used to offer more premium meat or improve the bottom line.

Prices are already approaching parity with animal-based alternatives at retail. Below is the average unit price of plant-based products in a category compared to all products in that category:

Plant-based meat, dairy, and egg products have made dramatic improvements in flavor and texture over the past few years. 2018 research from the research firm Mintel revealed taste as the top reason U.S. adults who eat plant-based proteins do so (52%), outranking concerns over diet (10%), animal protection (11%), the environment (13%) and even health (39%).

Plant-based foods are now available in more retail and foodservice outlets, and consumers now expect to find them in the main sections of menus and store shelves, not in specialty areas.

A 2017 study from the London School of Economics found that vegetarian dishes were ordered twice as frequently when listed along with other dishes than when they were listed in the “vegetarian section”. Placing plant-based dishes in familiar contexts makes it easier for consumers to discover and order them. 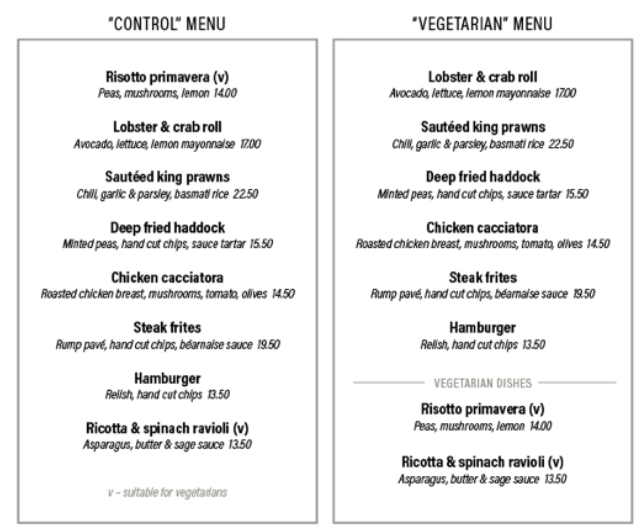